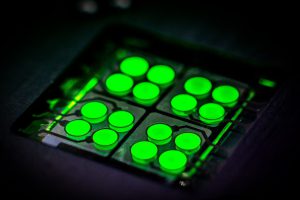 Known as the cyUltimateGreen™, the product delivers efficiency of more than 20 percent, which meets current industry specifications of 150cd/A in top emission devices. It demonstrates lifetime of 400h LT95@15mA/cm², and color point and spectra that match today’s DCI-P3 standard. In addition, the product shows compatibility with BT2020, a color standard that requires greater color purity than DCI-P3, and one that will significantly enlarge the color depth.

The milestone delivers a materials technology breakthrough that will help display manufacturers unleash the full efficiency potential of new-generation OLEDs and catalyze game-changing OLED products. It starts with TADF Deep Green and will soon include a TADF Deep Blue solution.

The cyUltimateGreen Emitter: A “Brightness” Booster for Next-Generation OLEDs

Within the OLED stack is the emissive layer. This is where the light is made. Within the layer are Red, Green and Blue pixels. By combining all three, the full color gamut is rendered in the display. The Green pixel influences brightness. It accounts for as much as 25 percent of the OLED stack costs.

CYNORA’s CEO, Adam Kablanian, commented: “We set out to innovate a differentiated new technology that would enable display leaders to leapfrog beyond legacy emitter solutions for next-generation OLEDs. We believed that TADF was the most promising approach. We knew that with the right blend of advanced technologies and chemistry expertise, the breakthrough was achievable. Our talented team has confirmed the commercial capability of the TADF emitter technology, which has the ability to offer customers substantial savings. The kits are now ready for customer testing and verification.”

Behind the cyUltimateGreen product is CYNORA’s Generative Exploration Model (GEM). GEM is the materials discovery engine pioneered by CYNORA to identify with extreme precision the most relevant and useful molecules, and related combinations, from an infinite source of chemical molecules.

GEM combines two key elements: artificial intelligence (AI) and the brainpower of CYNORA’s chemists. While AI offers immense computational capabilities, there can be prediction errors and other uncertainties that diminish the output of useful data for specialized applications. GEM supercharges AI for OLED materials discovery by pairing its computing power with the materials expertise and OLED device knowledge of CYNORA’s chemists to identify molecules with high potential. From there, a scoring system predicts how closely the molecule conforms to must-have parameters, as well as its usefulness for the target purpose – in this case, high-efficiency emitter materials.

GEM strengthened CYNORA’s discovery and synthesis capabilities, and fast-tracked completion of the cyUltimateGreen product, said CTO, Dr. Jan Richter. “Given that the universe of chemical molecules is infinite, identifying the most relevant molecules is exceedingly tough,” he said. “While AI gives us a powerful discovery acceleration tool, our imperative isn’t just to find molecules that are a theoretical fit; they must also be chemically synthesizable. That’s where CYNORA’s chemistry expertise provides the value add.”

The expertise extends to CYNORA technologists’ deep knowledge of the full OLED device. This helped the company engineer the cyUltimateGreen to meet mass-production requirements, without requiring display leaders to make expensive alterations to their manufacturing lines. Essential details like matching evaporation temperatures to meet current device architectures, and aligning material parameters (like energy levels), were part of the calculations. To further reduce cost, integration factors were also considered, like how to manufacture the product within existing hardware and process frameworks without requiring extra evaporation chambers.

cyUltimateGreen is a trademark of CYNORA GmbH