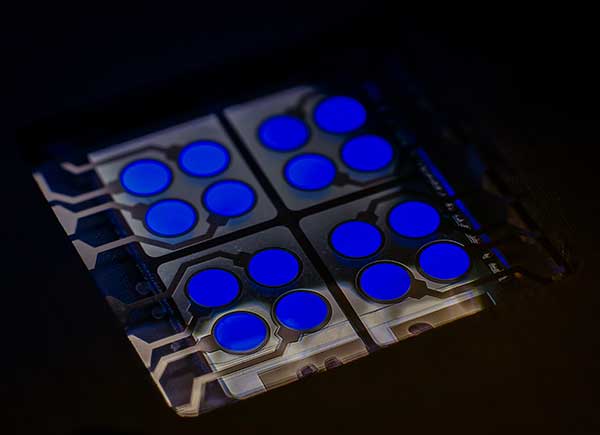 CYNORA today debuted its first commercial product, a fluorescent blue emitter that promises to significantly improve the efficiency of Organic Light Emitting Diode (OLED) displays used in mobile phones, laptops, TVs, and other applications. The company is an emerging OLED materials leader. The product, known as the cyBlueBooster™, employs an advanced molecular design and is >15 percent more efficient than comparative emitters. It can be easily integrated into existing OLED stacks and is available in multiple shades of blue for application customization. The product aims to help display manufacturers immediately harness untapped efficiencies in the emission layer of their OLED devices.

The launch marks CYNORA’s transition from cutting-edge research and development to commercialization. The new product is the first on a technology roadmap that will later include green and blue emitters based on the company’s proprietary and differentiated TADF materials platform.

The OLED market continues to grow with the technology driving an array of flexible, foldable and ultra-thin displays. To enable the novel form factors and achieve superior color points, low power consumption is a central imperative. Yet, while OLED technology is well in the mainstream, the OLED devices have still to reach peak efficiency. The emission layers determine the overall performance of the OLED stack and exert a strong influence on power consumption. Blue is the least efficient emitter. Consequently, the industry is focusing intensely on finding new ways to improve efficiency. Also, with next-generation displays like QD OLEDs using blue emitters only, the need for ultra-high-efficiency options is even more urgent.

CYNORA developed the cyBlueBooster to address the high-efficiency imperative. Engineered using proprietary simulation techniques, the product delivers >15 percent higher efficiency over comparative solutions, while also improving the color point. It has a narrow emission spectrum (<30nm full-width at half maximum) which reduces harmful UV light and makes the viewing experience easier on the eye. The product can be seamlessly integrated into existing OLED devices with only minor adjustments to the stack. Depending on the application, customers can select a particular shade of blue to optimize their stack and further differentiate their OLED products.

cyBlueBooster is a trademark of cynora GmbH